On March 15th, the NYU Abu Dhabi with the collaboration of Dalma Museum had held a lecture in the Museum’s Majlis by the researcher Thani Almuhairi from Tabah foundation. He had revived the memory of a great scholar who had lived and died in Dalma Island, The Sheikh Saif bin Bat’han.

The Main points of the lecture were:
– How did the lecturer hear about Ibn Bat’han.
– What did he find about him in Bahrain and Saudi Arabia.
– The scholars who belongs to his class.
– His poems and his works in Dlama.

The researcher Thani Almuhairi who is a poet as well, had read and explained some of the poems of Ibn Bat’han, and he had discussed the ideas in the poems with the audience. Six People who were interested in the topic have attended the lecturer. That helped them in understanding the different aspects of the life that were in Dalma Island y connecting the stories they heard from their grandparents with the new information from the lecture.

Professor Naved Bakali invited to speak at the Understanding Extremist Violence in the Middle East and Beyond Symposium, hosted by the National Academies of Sciences, Engineering, and Medicine, at NYU Abu Dhabi. Papers were presented from experts from the US, Russia, France, and the UAE. Dr. Bakali’s paper problematized countering violent extremism programming and proposed alternative models.

Tabah Futures Initiative’s Abaas Yunas was invited by INSEAD, one of the world’s leading business schools, to lecture two global Executive MBA classes on the topic of “Contemporary Perspectives on Islam.” The lectures were aimed at helping students to understand the place of religion in the contemporary Muslim world through discussions on definitional problems associated with understanding religion today, religious identity, the tripartite foundation of Islam, religious reform, and prospects for religion in the future. 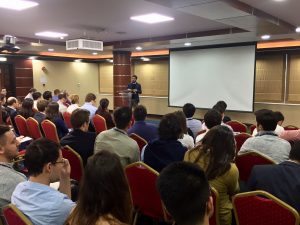 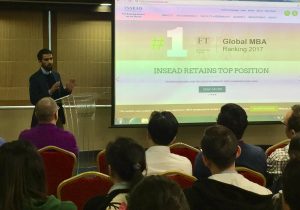 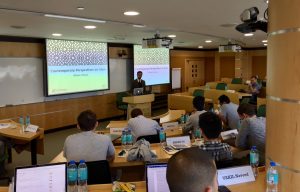 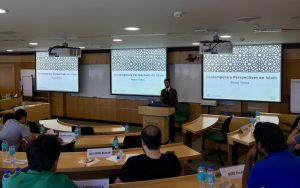 Countering religious ideological extremism in Muslim countries has been a relevant and important issue in the Muslim world and the West for a number of years. However, there are other forms of extremism, which are often overlooked and pose an equally serious threat to our societies. Far-right extremist movements have become increasingly popular in North American and European societies. Oddly enough, these far-right groups echo a number of similar claims that Muslim extremist groups propagate. This research brief examines the growth of far-right extremism and draws parallels to Muslim religious ideological extremism. Through examining these parallels this report provides insights into the ideological underpinnings of extremist thought from these differing strands and will discuss implications for countering violent extremism policies for both of these forms of extremism.

Islamic Education at the elementary and secondary school level has become the primary means through which generations of Muslim children in the Arab region are learning about their religion. In many cases, school-based learning is the only means of direct religious instruction that young people receive. As a result, contemporary Islamic Education curricula and pedagogy bear an immense responsibility for shaping religious identity that was in previous generations more evenly distributed across society. This responsibility has been amplified and increased due to the problems of religious extremism with which the region has been afflicted over the last two decades. This report discusses the findings of the Tabah Futures Initiative study of Islamic Education in the UAE. Informed by a series of in-depth interviews with professors, consultants, school administrators, teachers, and parents, this report provides unique insights on some of the opportunities, gaps, and challenges associated with Islamic Education in the region.

END_OF_DOCUMENT_TOKEN_TO_BE_REPLACED

A lecture organized by Tabah Foundation was given by Mr. Hassan Spiker, researcher in Islamic philosophy logic and mysticism, in Cairo on April 2017.

Many natural scientists today believe that their disciplines are objective, universal, neutral and value-free, and that their truth claims are completely independent of any form of philosophy. Moreover, although the claims of positivism were decisively discredited long ago, many contemporary scientists and science enthusiasts still believe that physics, chemistry and biology are the only sources of real knowledge, leading them to claim that the true answers to metaphysical questions, like that of the existence of God, cannot possibly be known – or even that such questions are meaningless.

However, the popularity of this type of scientism is particularly surprising when one considers the consensus amongst even mainstream modern philosophers that physical science, far from being capable of dealing with all questions, accounting for all aspects of reality, or providing the basis for all forms of objective truth, actually has to assume a great many of its first principles, and cannot itself ‘prove’ a great many of the facts that it must accept in order to be able to operate. Indeed, in order to do so, it must employ another discipline, historically considered the most scientific of the sciences: metaphysics.

The talk, moderated by researcher  Ahmad AlAzhari at Tabah Foundation,  considered something of the history of the relationship between metaphysics and the natural sciences both in the West and in the Islamic world, and arrived at answers that would be of crucial importance to contemporary debates about the scientific status of the traditional Islamic disciplines.

On Monday 19 December, Tabah Foundation hosted a special visit from the Delegation of the European Union to the UAE. The delegation was led by Ambassador Patrizio Fondi and Mr. Jan Figel, EU Special Envoy for the Promotion of Freedom of Religion or Belief Outside the EU, who was on a special visit to the UAE. They were received by Noureddin Harthi, CEO, and Abaas Yunas, Analyst at Tabah Futures Initiative.

Discussions were wide ranging and highlighted important issues related to religion and the contemporary world, including the role of faith and reason in the Islamic tradition, the depth and diversity of Sharia and it’s central importance to the religious practice of Muslims, the application of Sharia in non-Muslim majority countries and the dependence of a correct understanding of Sharia on sound scholarship as embodied in the mainstream Islamic scholastic tradition. Mr Yunas explained that since the world is a bastion of a plurality of ideas, value systems and worldviews, then true dialogue and tolerance can only emerge when there is universal acknowledgement of this plurality. Mr Figel stressed the importance of promoting the understanding of religion in all sectors of civil life and commended the work of Tabah Foundation in this regard.

In the atmosphere of love and tolerance that the United Arab Emirates experiences on the occasion of the Prophet’s blessed birthday s, the Tabah Foundation held a presentation entitled “The Prophet’s Birthday s: The Ardour of the Emirates” in the Capital Abu Dhabi, given by researcher and poet Thāni al-Muhairī. He presented works of art expressing aspects of the Prophet’s birthday s by artist Saif ‘Ali as-Sādah.

In attendance at al-Muhairī’s presentation was Chairman al-Ḥabīb ‘Alī al-Jifrī, along with several other notables, and a number of youth ardent for this momentous occasion celebrated throughout the Islamic World. He started by looking at scholarly works dealing with the blessed biography of the Prophet s, and finished his roundup by looking at works authored specifically about the Prophet’s birthday (Mawlid) s beginning from the Fourth Century AH. He showed that the Mālikī scholars have over a hundred compositions that are recited on this blessed occasion, some of which are mentioned by the Imām and Ḥadīth scholar ‘Abd al-Ḥayy al-Kattānī (d. 1962 CE) in his book, at-Ta’ālīf al-Mawlidiyyah, in which he relates the works that have been authored in this field by the great legal and Ḥadīth scholars of the Muslim Community through the centuries. Such include al-Ḥāfiẓ Ibn al-Jawzī al-Ḥanbalī, al-Ḥāfiẓ al-‘Irāqī in his book al-Mawrid al-Hanī, al-Ḥāfiẓ al-Sakhāwī, and others.

Scholars have found it fitting to celebrate the Mawlid since it was first instituted by King Muẓẓafar of Irbil, the son-in-law of the victorious Sultan Ṣalāḥu’d-Dīn al-Ayyūbī, and one of his chosen few. Al-Ḥāfiẓ Ibn Kathīr said in praise of him that he was, “One of the great, magnanimous rulers, and the majestic kings. He had a positive legacy … He used to observe the blessed birthday in Rabī‘ al-Awwal, and celebrate it in a most tremendous fashion. Nevertheless, he was a chivalrous, courageous and ferocious champion, as well as an intelligent and just scholar, may God have mercy on him and be gracious to him in his final abode.” The Mawlid he held was attended by a group of legal and Ḥadīth scholars (Muḥaddithīn and Ḥuffāẓ) and they approved of it, among them Sheikh Dār al-Ḥadīth al-Ashrafiyyah, the Muḥaddith, Abū Shāmah al-Maqdasī (d. 655 AH), may God have mercy upon him.

The people of the Emirates have also contributed to this authorship. The Sheikh ‘Abdullāh Bin Muḥammad Bin Ṣāliḥ al-Khazrajī put the evidences for the Mawlid of Imām al-Barzanjī into poetry, naming it, al-Shāhid al-Munjī li’l-Mawlid al-Barzanjī.  Sheikh ‘Abdullāh studied with his paternal uncle, Sheikh Ḥasan al-Khazrajī in Dubai, and he authored a number of works in various branches of Sacred Knowledge. Other scholars, such as the Sheikh and Minister Muḥammad al-Khazrajī authored a treatise concerning the legal ruling upon celebrating the Mawlid. Also included are the Sheikh and Muḥaddith Aḥmad Bin Sheikh Muḥammad Nūr Bin Saif al-Muhairī and Sheikh ‘Īsā Bin ‘Abdullāh Bin Māni‘ al-Ḥumairī, and others.

He noted that in the eighties, many of the stewards of the Mawlid in Abu Dhabi passed away. They used to celebrate it in a distinct and unique fashion – the likes of the late Sheikh Muḥammad Bin ‘Abdullāh al-Qamzī, Sayyid ‘Abdu’r-Raḥīm al-Hāshimī, the Judge of Abū Dhabi, and the distinguished poet ‘Abdullāh Bin Sulayem al-Falāsī. Also amongst them was Sheikh Jābir Bin Rashed al-Hameli, Thani Bin Murshid al-Romaithi, Rāshid Bin Khalaf al-‘Utaibah, Darwīsh Bin Karam, and others. Some groups kept this classical style alive, and the Hāshimī descendants of the Prophet s continue to pass it down, preserving this legacy.

He also mentioned the families that celebrate the Mawlid in the Emirate of Dubai, such as Āl Mejren and al-Futtaim, as well as some of its stewards, such as Sheikh ‘Abdu’r-Raḥīm al-Murīd and Sheikh Aḥmad Bin Ḥāfiẓ.

Mawlid after the Unification of the Emirates

The Prophet’s blessed birthday s is considered an official holiday in the United Arab Emirates, and the government has undertaken the patronage of this great event, holding celebrations in its honour. The Ministry of Islamic Affairs and Endowments holds a celebration of the Mawlid every year, attended by Sheikhs and dignitaries, just as the Department of Islamic Affairs and Charity Work does in Dubai.

The historical information presented made a great impression upon the attendees, as did the feeling of pride and belonging to a nation whose very basis is the love and tolerance inherent in the identity of its people. Amongst the comments, Dr. Hessah Lootah, Professor of Media at UAE University said, “…it is an essential part of our culture and heritage such that we cannot conceive of a wedding without a celebration of the Mawlid”. The evening was concluded with a prayer for the Muslims of the world, and humanity in general, for the advent of love and peace, along with a donation of the reward for reciting Sūrah al-Fātiḥah to the soul of Sheikh Zayed Āl Nahyān, may God have mercy upon him.

On Sunday 4th December 2016, Tabah Foundation was pleased to receive Ambassador of Canada to UAE, Masud Husain, and Political Counsellor at the Canadian Embassy, Hamza Abdulbasit.

Discussions centred around understanding Tabah Foundation’s role as a specialist research institution dedicated to creating new paradigms of understanding religion in the contemporary world. Mr Yunas explained Tabah Foundation’s areas of expertise and highlighted current projects and their relevance to addressing immediate issues in the public religious space. Views and opinions were also shared on a number of different matters pertaining to changes in the regional and global religious landscape.